Close
View all
Clear AllClose
Your cart is currently empty.
CUSTOM HTML BLOCK You can choose your own style of the cart icon, for example
Subtotal
$0.00
Cart PageCheck out
Close Let customers speak for us 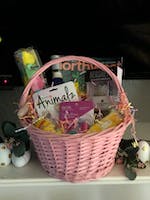 Perfect to add into an Easter basket or stocking. We recently ordered the massage gun and couldn't be happier with our purchase. We were able to use it during a recent visit to a family member's. After traveling for hours, our backs were hurting and they said to give it a try. MIRACLE! We were able to survive another 6-hours of sitting in a car!
After getting home, with intense workouts, tired muscles and more, we decided we needed to get our own massage gun. It came just in time for my husband's birthday and he uses it regularly. Even our bird dog loves a good massage after a day in the field.
Thank you for making such a great product!

I have now bought three massage guns--one each at the different price points that seem to be widely available. The first massage gun I bought was $200. My parents loved it too much, so I let them have that one. The next massage gun I bought was around $60 after coupon. It never worked. I returned it, but even though it never even turned on, I knew as soon as I received it that the build quality was no where near as good as the first one I purchased. I didn't want to try another one of the cheap models, so this one is the third one I bought at the middle price point. This one has a slightly more minimal design than the first one I had purchased, but it is identical in function--or might be better. In addition to preferring the look of this gun, it seems quieter. I'm not sure if the more expensive model my parents now use was quieter when it was brand new, so we'll see over time, but to anyone in the market for one of these, skip the cheap models, and skip the more expensive models--this is just as good. Love this thing. I saw thoughtful because aside from the flat iron you get a nice bag to put it in and a heat glove to protect your hand. The box itself is a nice, very sturdy box and I'm actually going to keep the flat iron inside as it is much easier to stack all my beauty tools.
In regards to the flat iron itself it looks to be very high quality, well made and well thought out. There's a nice LED screen that tells you what temperature it currently is. Down below is the level control and power button. At the back of the flat iron is a little button you slide up and down to lock the flat iron closed when done. I have long medium thickness hair and this flat iron was able to make my hair stick straight at 360 degrees. I sectioned my hair in pieces and naturally applied a heat protectant. It seemed fairly easy and not too difficult. I attempted to do a little twirl my layers and it worked as well. Although I need to get the hang of it. I love the versatility of this flat iron and curler situation. So far I'm pretty happy with this flat iron/curler. It works well and thus 5 stars for now!

I am pretty much in love with this hair tool

I am pretty much in love with this hair tool. First impressions were great, the box looks great and it came stored in a velvty storage bag. THE INSTRUCTIONS are so HELPFUL. I have never come across a more helpful instruction manual. It has a temperature guide for different hair types, styling tips depending on what you want to do, cleaning and storing instructions. Not to mention it is printed on laminated paper and is folded like a nice brochure. I have never encountered an instruction booklet that isn't thin, flimsy, and in black and white with confusing instructions and diagrams. The weight of the product is lightweight enough that it doesn't wear you hand and wrist out before you finish your look. The cord is really long and the swivel feature keeps you from getting frustrated with awkward cord angles in the way. The thing heats up really quickly and it clearly shows what temperature you are working with on the LED screen. The screen shows the temperature rising so you have an idea of how long you have to wait. I am not gifted when it comes to styling hair and this thing was super easy to figure out and use. I really like it and am super pleased with it. I would recommend it to anyone. I might throw everything else I own away too. OMG this changed my morning 🌞I brought this to work and I can curl my hair at my desk now! This makes so much more time for myself in the mornings. I used to have to curl my hair at the gym with so many people everywhere.Very portable and heats up in 30 seconds

I’m not an expert at curling so I’ve been using the default heat setting from the instructions, but this has a digital screen that allows you to adjust the heat and direction of the curls. I had a little bit of difficulty deciphering the instructions, but the seller helped. It’s a lot easier to use than it looks. You don’t need to fit your hair into the opening - just drape it over the curler, and it will pull the hair in. It curls each section in no time at all. My hair goes halfway down my back, and I curled it in 10 minutes. As a bonus, it comes in a fancy box with a velvety bag to store it. You won’t regret this purchase.

Wow! I love this product. The idea of being able to style and blow dry my hair at the same time is brilliant! I used to blow-dry my hair AND use a flat iron. I have wavy frizzy hair and didn’t anticipate this product to give me super straight hair without it being frizzy. I thought I would still need to use my flat iron. Well, I was pleasantly surprised! In about 20 minutes (that’s super-fast for my very long hair) I was very thrilled at how straight my hair was. While I was using the product, my hair seemed like it was going to still be a little frizzy. But, I spent a little more time styling and used some frizz-free straightening styling products. I am BEYOND satisfied!! The pictures where my hair is wavy and frizzy I let air dry. The pics with straight hair are from using this product and some styling products. What a huge difference I must say! This product is highly recommended and very convenient!!

I will buy another one for my mum!

I like it very much as it does all the work for me in one step. It is very light weight and very easy to use. The power has 3 switches for “ low, middle and high”. It helps to dry my hair fast and since I have thin hair and it looks like it would give me volume after I blew dry it too. This brush also have the straightening and curling function, I love it as it allows me to style my hair in a very easy way，This dryer/brush is so easy to use. It is light weighted so I don’t feel sore after styling my hair. The temperature is just fine, not too hot to burn my skin or hair. Comparing the price from other company, the value is great! I also love the clips that come with the brush. overall, it is well made and with the money，Both have low, high, and cool settings. This is a great idea to get this hot air brush and dryer at this price. I think it’s PERFECT for shoulder length hair or a couple inches past, because it makes my hair softer and It's very easy to use. I will buy another one for my mum!

I have wavy curly hair and usually just let it air dry. I hate dealing with a blow dryer and brush. If I ever straighten my hair I just use a straightner after my hair is dry and then my hair looks flat. This brush dryer was really easy to use and gave my hair volume. I could probably get more volume if I tried sectioning my hair and had better technique. Also the brush doesn't get too hot so I can use it on my 4 year old too. I would definitely recommend it.

Works really good drying while brushing my hair. Unlike others, this one is lightweight and easy to use. It has 3 powers: low, middle, and high. I have used this everyday for the past 3 weeks. Still works like the day I first got it. Hoping it'll last.